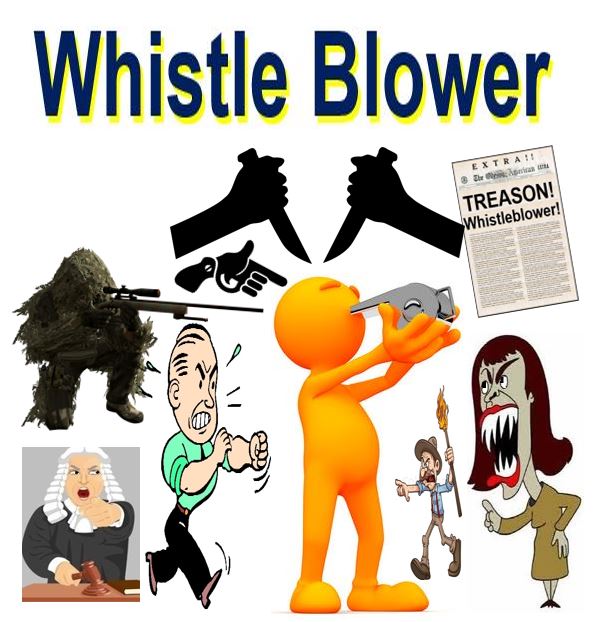 How to blow the whistle

The first thing to understand is that whistleblowers do not have to use the public or private sector laws or "systems" to blow the whistle unless it makes sense to do that. Nothing is lost, except the opportunity to call out a bogus performance review as a reprisal on being suspended or sacked, because to date these protections do not protect your employment in a practical way, when you need them to.

Before you do anything, make yourself familiar with the many ways that the legislated systems can work against you, because they do not ensure that the wrongdoing you disclose will be investigated, corrected or reported on.  Consider making a disclosure to an external regulator, because it may maximise your protection and may allow you to go to the media for lack of action. If you do, comply with the timelines set down in the legislation.

In practice the public sector systems are for tracking your compliance, not the system operators, who are afforded every leniency when it comes to whether they have delayed or failed to do what was required or even banded together to ensure that protection is denied. They operate to deny you any role in a system that culturally has you pegged at the outset as a troublemaker and not one of them.  Any assumption that there is a shared purpose in improving integrity and accountability is treated with disdain and even malice. The "us-and-them" divide plus the reassuring myth that employers wouldn’t do the wrong thing all too often determines the outcome of your claim.

They use the potential for conflicts of interest to make reputational risk their priority over transparency and accountability. This is why employers routinely manipulate employees to bury the risk you represent. So until internal investigative units are set up to be operationally and legally independent of the employer and its human resources staff in all that they do, you will need to take it into account in working out how best to blow the whistle.

The systems are not designed to rein in wrongdoing. Because disclosers routinely bear the brunt of system failures, which reinforce the cultural status quo of incompetence and cover-up, which is where corruption takes over. Even if serious wrongdoing is investigated, the outcome remains largely secret, to reduce risking the myth of their own perfection. Minor wrongdoing is routinely flicked to the risk prevention policy team rather than investigators. It’s a cost versus benefits analysis that ignores the benefit of a grassroots approach to openly building ethical structures. Statistics only report on the job to be done - the number of disclosures - rather than the job done. Until this changes, wrongdoing will be covered up one way or another to ensure life as it is, continues.

For example, system operators get at least 90 days to do something or nothing before you get an opportunity to take your disclosure to an external investigative body or a politician or the media. But if you get your dates wrong in the absence of any notification to the contrary or you decide to update your disclosure, you risk losing whatever protection you might have had, even if it had been acknowledged at the outset.

The same self-serving costs versus benefits considerations that employers rely on to justify their policies also apply to the decisions taken by external investigative bodies like the ombudsman and independent commissions against corruption. These bodies may return your disclosure to your employer for their response as the precursor to doing anything. This policy builds on the myth that the employer understands its responsibilities and will admit to individual wrongdoing within its ranks, rather than exploit the opportunity to conceal it. It is another manifestation of the ‘us and them’ culture. This is why, in most cases, your disclosure doesn’t go any further than to alert your employer to the need to initiate a bogus performance review, as evidence that the subsequent termination was procedurally fair. It is useful, to have an honest performance review done before blowing the whistle.

In 2019 a federal court rightly labelled the federal system "technical, obtuse and intractable". Read the article from the Canberra Times and study the judgment, because you may avoid a lot of heartache by preparing for the task that lies ahead. https://www.judgments.fedcourt.gov.au/judgments/Judgments/fca/single/2019/2019fca0548  - or – https://www.abc.net.au/news/2019-06-12/whistleblower-laws-are-impenetrable,-federal-court-judge-says/11200678

Even so, the legislated systems may work for you depending upon the nature and substance of the wrongdoing, whether it is serious or not, whether it can be proved without your involvement and whether you want to achieve something other than just making a disclosure in the public's interest, which is always a good thing.

In every situation you need to understand and accept that seemingly good people will do bad things if pushed to by their employer. Some may even enjoy it. It can be very ugly and soul destroying. And if the wrongdoing is widespread you probably should find a new job upfront: because if you get into trouble, your job will become an albatross around your neck. So, if you want real reform but can’t see your way clear to resigning first, maybe don’t do it. Either way you will need to train yourself to be more strategic, to deal with the lies, lies and more lies that ordinarily pave the way to your termination.

Then, there is the question of your employment history: is it impeccable or is it a potential minefield?  And the support you have at home and at work. Do you have a mortgage? Is your partner willing to deal with you being unemployed? Will your partner be upset if you take a unilateral decision that adversely affects the home or family? Are the people you work with friends or just the people you happen to work with and either way, do they want any problems? We suggest you work out what you might do and whether you can deal with what the system operators might throw at you before you take one step.

First, get your head around the issues in a general sense by reading Whistleblowing: A Practical Guide by Brian Martin, free at https://www.bmartin.cc/pubs/13wb.html  Make yourself familiar with the relevant legislation and then, find an experienced, independently minded person to help with the risk assessment that you need to do before you devise a strategy.

Nothing, not even the wrongdoing, is as important as preparing well for the job ahead.

Stay off your work's email system. Don’t use their computers, printers or photocopiers (they all log what you do). Be aware of CCTV. It may be better to know where documents can be found than to copy them.

There is no safe or right way to blow the whistle, but here are a few likely scenarios based on our experience over years.

If the wrongdoing is of minor significance, does not involve your boss and your employment record is impeccable: then go ahead with an internal disclosure if you think you can trust in the system to get it right. Sit quietly and don’t draw attention to yourself. Accept that your disclosure may not be investigated and be happy with having done the right thing.

If the wrongdoing implicates your boss, his or her good friend and/or more senior management, consider your ability to deal with false accusations and very personal reprisals. Consider whether you should ignore the official whistleblowing systems altogether and take your information directly to an external authority, journalist, politician or other person, either anonymously or confidentially through a solicitor or other competent person able to act as an intermediary, should you want to contribute further as the events unfold. Remember being anonymous or confidential means never telling anyone, ever.

If the wrongdoing is significant and able to be proved on the documents you furnish or by reference to the records held on file, consider blowing the whistle confidentially through a journalist, politician, a union or activist organisation and learn to keep your cover intact within the workplace.

If you plan to advocate for reform on the back of your disclosure you need to be prepared for being falsely targeted before you start, because this job has few friends in the first instance. It may take a long time for you to find your real tribe again and get a new job. You need to be content with who you are before you start. A good example is Commonwealth Bank whistleblower Jeff Morris. He would not have succeeded in the way he did had he not been willing to be the public face of change.

If you decide to blow the whistle, consider getting in touch with us before you do. We may be the sounding board you need. But either way, take the time to prepare well for the job that lies ahead.